Mia Houman
Raised in rural NH, I grew up with trees and mountains as my playground. In 1997, I began my illustration studies at Syracuse University and graduated in 2001. I married my husband, Tom, in 2004. Together, we raise a dog and a cat. 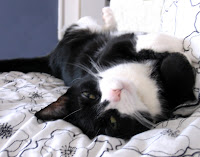 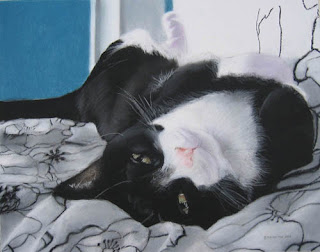 A few weeks ago, I happened to glance in my guest bedroom in between chores. My mellow kitty, Molly, was napping in the most peculiar position. It was one of those moments when you feel the need to grab your camera and just start snapping pictures. While I was snapping away, I was giggling at the fact that my kitty didn't even bother to move with a camera in plain site. She remained outstretched on her back, with her paws in the air. Apparently, this is THE most comfortable position. for morning naps.

The portrait is drawn in pastel pencils from my favorite reference photo taken that morning. A few areas were touched up with general pastels to create a smooth appearance. The drawing is 11 x 14" on smooth, vellum paper.

The small photograph above the portrait is the reference photo. 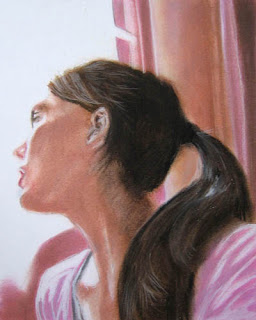 This week's Illustration Friday theme is "I Spy". Many people spy on wildlife, the weather, or their neighbors through the windows of their homes. In this picture, I am spying on some squirrels in my yard. It was a particularly sunny day and I love playing with darkness and light in the composition. 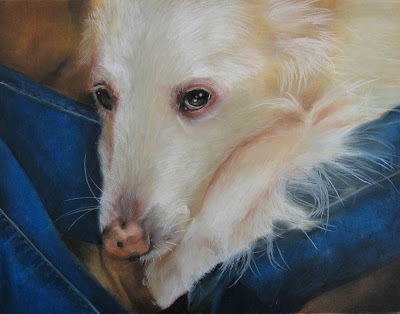 The dog drawn above is my own mixed breed, Lady Sasha. Sasha is not a snuggler per se, but she occasionally will place her head on you to show affection. The reference for this picture was taken while I was reclining in the sun and Sasha rested her head on my leg. She found a comfy niche and pouted. Her expression was priceless and it inspired the pastel pic above. Enjoy!

The video above demonstrates the steps involved in creating a pastel pencil portrait. I thought it would be interesting for artists and clients to see how I work. I'm still a novice at creating videos, but this is a start. I'm pretty proud of my portrait of Sunny and photographed the steps as I drew. It's always interesting in the beginning, when I am layering the colors. The piece looks flat and goes through the "ugly" stage. With a large piece, this stage can take time to work through. I have to remind myself that the piece will come together in the end. I guess that philosophy can work in life as well, when faced with a challenge. 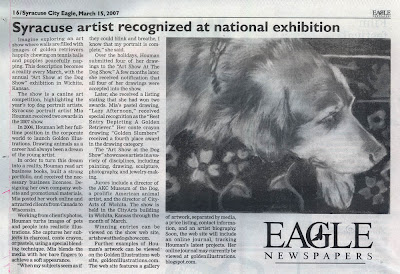 I've posted a clip above from the Syracuse City Eagle. The Eagle ran a story this week about my winning entries at The Art Show At The Dog Show. I am so thrilled to be in this week's paper! 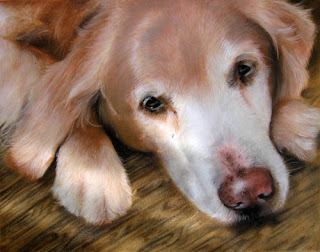 The picture above is my adorable senior golden, Sunny. This special guy is the subject of the two portraits below, that won awards at the Art Show At The Dog Show. Sunny is drawn in pastel pencils and his portrait dimensions are 11 x 14".

Sunny is recovering from a series of cluster seizures that occurred randomly two weeks ago. While he hasn't seizured since, he is quite sedate. He mostly rests and sleeps. I took the reference photo for this portrait while he was napping in the sunlight. He always looks like he belongs in a calendar, in front of a crackling fireplace when he naps. He just has the classic golden retriever look.

It's A Major Award! 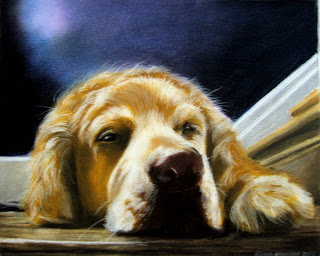 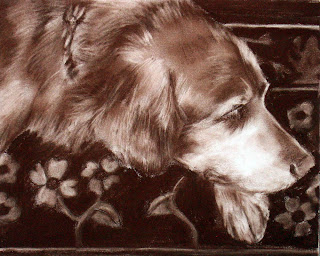 Hee, hee. Any fans of the movie, A Christmas Story, will remember the classic line that is the title of this blog. I thought it would be a light-hearted introduction to some good news.... I won two awards at The Art Show At The Dog Show!

I received a list of winners in the mail on Saturday. My drawing "Golden Slumbers" received fourth place in the Drawing category. And... My drawing "Lazy Afternoon" won the "Best Entry Depicting A Golden Retriever" award. The second award is very special and difficult to achieve. My piece was selected as the best portrayal of the breed in any medium, including sculpture, photography, and painting. The second piece will be shown on the competition website once the 2007 winners are added.

What makes this story a little more tragic/inspiring are the events that surrounded the news. The subject of my golden retriever drawings, my own dog Sunny, was in the animal emergency hospital shortly before the competition judging occurred. Sunny began having violent seizures at night a few weeks ago. The seizure cluster did not subside, so he was admitted to the local Animal Emergency hospital. After 24 hours, they were able to control the seizures with medication and he was released home. Sunny has had a slow recovery. He has lost a lot of his vibrancy, but every day he gains a little more of his old self. These awards came at the perfect time to pay tribute to a remarkable rescue golden retriever.

I've posted pictures of the winning pieces above. The first piece is the "Best Entry Depicting A Golden Retriever" and the second piece received a 4th place award in the "Drawing" category. For more information about this prestigious art show, log on to www.artshowatthedogshow.com. The 2007 results should be posted over the next couple of months. You can also view past winners of the competition on this site. The art show hangs in Wichita, Kansas until the month of April. 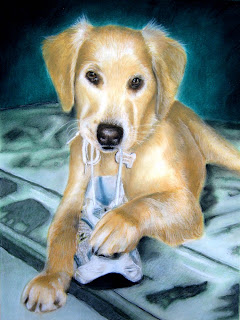 The adorable puppy pictured above is named Bear. Bear's owner is wildlife and dog photographer, Lisa Husar. Photos of Bear have appeared in magazines, greeting cards, calendars, and catalogs, including the cover of the Fall 2006 Coldwater Creek catalog. I am proud to have drawn a golden retriever who I have seen in print. Bear is probably one of the most photographed golden retrievers around.

In this scene, Bear has stolen his owner's sneaker and happily chews on a few laces with the appearance of innocence in his sparkling eyes. The portrait of Bear is drawn in pastel pencil and is 12 x 16" in size.